What emerging countries are growing the fastest and why? 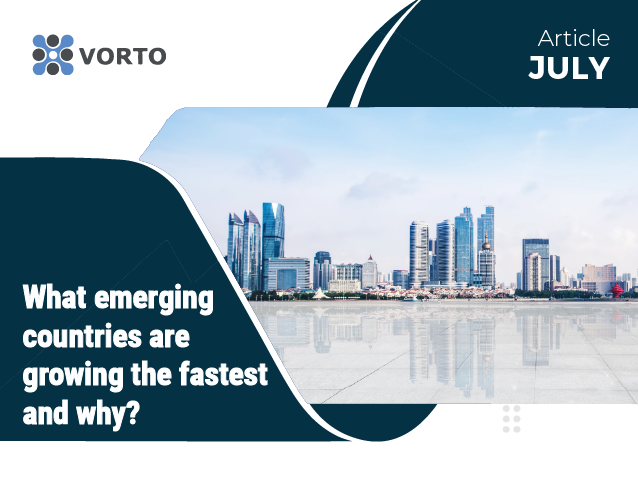 The last eighteen months have been challenging for all. The pandemic has been both a health and economic crisis. As humanity left the adversities of 2020 behind, 2021 seemed to be brighter due to the reopening of society. At Vorto, we have been studying the consequences of the global pandemic and how this in turn will shape economies moving forward. As part of this inquiry, our interest and curiosity extends to what emerging countries are growing the fastest and why.

Back in April, the IMF studied 193 nations to shine some light over how countries will grow throughout 2021. The IMF reported that 170 nations were expected to grow at 1% and more and around nine nations were set to grow between 0 and 1%. The data is promising. However, Nasdaq made an interesting point, stating that this data is reflective of GDP and it should be noted that the actual time for countries and its people to heal will take longer.

Needless to say, despite the setbacks of 2020, IMF’s data established which countries are set to be the fastest growing economies in 2021. Here we examine the growth of Libya, The Maldives and India.

Coming in at number one is Libya. Classified as an upper middle-income economy by the World Bank, the country is oil-rich and a member of OPEC. The nation has one of the highest per capita GDPs in Africa. However, it should be recognised that the last decade has been a challenging time for the nation after its rule of Muammar Gaddafi came to an end in 2011. The economy fell from $80 billion to $17 billion and the latter part of the 2010’s saw Libya fighting for its recovery through to 2019. Oil and gas has accounted for much of the recovery, with the World Bank reporting that the industries account for over 90% of fiscal revenue and merchandise exports and 60% of aggregate economic output. Libya’s economy is predicted to grow by 130% in 2021 and GDP is estimated to grow to $24.26 billion.

Set across the equator in the Indian Ocean, The Maldives is a nation of 1192 islands and is renowned for its tourism. The population is spread across 185 islands and like Libya, it has been classified by the World Bank as an upper middle-income country. The country has experienced robust growth which has been supported by its luxury tourism industry. This in turn has enabled the country to build strong infrastructure and affordable public services. Tourism in the nation accounts for approximately 25% of GDP. The nation relies on fisheries as another major contributor to its GDP. 2020 was a challenging year for the nation’s economy as the government closed borders between March and July to combat the spread of the coronavirus. This heavily impacted the tourism industry. However, there has been some revival in tourism and the economy is predicted to grow by 18.87%. With this growth rate by the IMF, the nation is set to grow from $4.5 billion to $7 billion by 2025.

According to the IMF, India is the fastest growing trillion dollar economy in the world. The population comprises over 1.2 billion, making the nation the world’s largest democracy. Like other nations across the globe, country-wide lockdowns in the first half of 2020 saw economic activities come to a halt which hugely impacted both production and consumption. The impact of this lockdown meant that India had two consecutive quarters of negative GDP growth being reported. This resulted in the country entering its first ever recession in history. The Delta variant first found in India has also presented challenges for the nation. Yet despite the contractions of 2020 and the implications of the new variant found in 2021, the IMF has recorded that India’s economy is predicted to grow at 7.2% between 2021 and 2025. This is due to the The Union Budget presented back in February. The Reserve Bank of India stated that ‘public investment in key infrastructure sectors is a force multiplier with historically proven ability to revive the broader economy by directly enhancing capital stock and productivity. This in turn attracts private investment’.