Are we becoming more conscious in business? 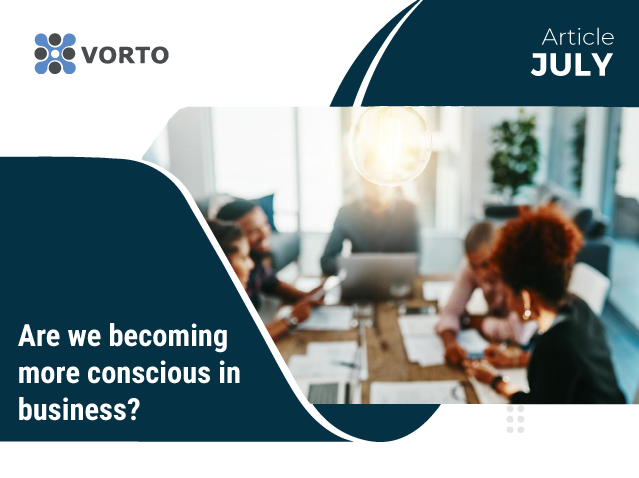 Vorto – Are we becoming more conscious in business?

Just last week, the UK witnessed a heatwave whereby temperatures hit 40 degrees for the very first time. It was a historic event in the country which was a grave result of climate change. As a direct result, the UK government was held accountable by green activists (Friends of the Earth, ClientEarth and the Good Law Project)  who pushed the court to scrutinise the current plans to cut carbon emissions in the country. Through this cause of legal action, the British government is being sued because it has failed to meet its obligations under the Climate Change Act (CCA) 2008. The result of the legal investigation was that the current strategy is inadequate and that it lacks both explanation and quantification as to how the government will reduce carbon emissions by the end of this very decade. The government has eight months until it is expected to present its strategy in April 2023 to parliament for cutting emissions and achieving its net zero strategy. The consequence of this deadline will therefore see a push within businesses in the UK to align their carbon strategies to make the country climate safe for the generation to come.

If we turn back 100 years to the 1920’s, we defined this era as the roaring twenties. It was a period of political, societal and cultural upheaval. People pushed for better and we witnessed the progression of female rights. In this post war climate, consumer culture flourished. Fast forward 100 years and the twenties we are living through are also set to revolutionise the world we live in on a political, societal and cultural level. Yet this time, this era will be known as transformative twenties due to the ecological and social consciousness of this transformation.

The century that followed the roaring twenties was one that was underpinned by an economic model that used GDP as central to marking the success of society. Yet, according to English economist, Kate Raworth who is a renegade in her field, the definition of what makes a successful society in the 21st century is set to change. Raworth questioned the economic model of the last 60 years and concluded that it needed to move from its focus on capitalism as reigning supreme to a new conscious framework that balances both essential human needs and planetary boundaries.

Thus, regarding recent events from an ecological standpoint, not only will businesses have no choice but to become more conscious due to changes in the law, they will also begin upon a journey to being more conscious as we arrive in a new era of economic policy and benchmarks.

As for being conscious in terms of the wellbeing of people, this paradigm shift has been accelerated due to the pandemic. Whilst of course conscious businesses that place people at the centre of them are not new, they are gaining greater relevance and significance in today’s society. People are seeking greater meaning and purpose in their work. This was notably evidenced just a year ago when the ‘Great Resignation’ economic trend started to unfold globally. Worldwide, people voluntarily began to resign from their jobs due to long-lasting dissatisfaction with their jobs, the desire for better connection with a company’s purpose and overall investment in employee mental health and wellbeing. People are rejecting the notion of productivity as the primary benchmark of a successful company as this does not prioritise the ‘human nature’ of the business. Instead, the focus will be become more conscious driven, placing greater attention of mental and emotional health to avoid stress related illnesses and burnout.

So what are all these political, social and cultural shifts amounting to? Firstly, nothing is insular. All events are interconnected on some level. People will want to both buy from and work for businesses that take ecological goals and the wellbeing of people seriously. The laws and deadlines that governments set will impact economic policy and business frameworks that companies will be held accountable to legally and also by activists and consumers. Fundamentally, the next decade is set to be transformative and will lead to businesses and governments becoming more conscious.